The thrilling Quiet Professional series comes to a fiery conclusion with the release of Falcon! 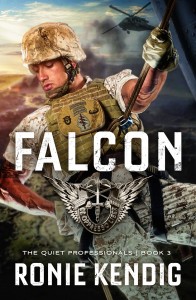