HOOAH! I’m THRILLED to share with you the last cover in the Quiet Professionals Series–FALCON (May 2015)!! Amazing designer Kirk DouPonce knocking this one out of the UNIVERSE! 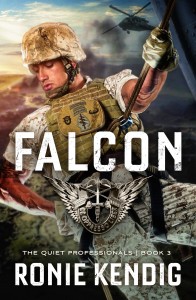 In the upcoming days, I will introduce you to our cover model who, just like the men on the covers of Raptor 6 and Hawk, is a real American hero–Marine Sergeant Gabriel Martinez, a double amputee who was awarded the Purple Heart. It is an HONOR to have him featured on this cover!!

GIVEAWAY!! Help spread the word about this amazing cover and I’ll give away one (1) currently published Rapid-Fire Fiction novel and one (1) Rapid-Fire fiction logo t-shirt to one awesome reader! Enter here: