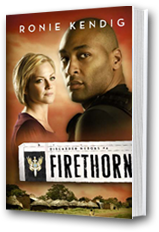 Uhrichsville, OH – From award-winning suspense writer Ronie Kendig is the thrilling conclusion to her four-part Discarded Heroes series. Scheduled to release in January 2012, Firethorn takes you into the world of black ops and espionage as a fugitive from injustice and a covert operative join forces to save the Nightshade team.
Former Marine Griffin “Legend” Riddell, a fugitive from injustice, finds it difficult to trust anyone. Covert operative Kazi Faron, the woman sent to free him, has a dangerous secret that may jeopardize her life, mission, and the only man she respects. As Griffin and Kazi race around the globe to save Nightshade, the danger mounts. Will they find the culprit sabotaging their black ops team? Can their newfound feelings and trust survive when Griffin and Kazi face truth and terror?
Publication Data:
Firethorn by Ronie Kendig / January 2012 / $12.99 / 352 Pages / Paperback
ISBN: 978‐1‐60260‐785‐9

Praise for the Book:

“Roller coaster. It’s the perfect word to describe the twists, the turns, and the rush of exhilaration that came from reading Firethorn. Once again, Ronie Kendig delivers a novel that is wildly entertaining and at the same time deeply affects your heart.” — James L. Rubart, bestselling author of Rooms, Book of Days and The Chair

“Firethorn has many moving parts that synchronize together with the beautiful precision of an expensive Rolex watch!”— Don Brown, author of Navy Justice Series

“Firethorn is a book that races forward on multiple fronts with the trademark action and romance that Ronie Kendig excels at. The action moves so fast with the characters I love that I couldn’t put the book down, and it left me longing for just a little more.” — Cara Putman, author of Stars in the Night and A Wedding Transpires on Mackinac Island

“Readers will fall in love with these tough‐as‐nails characters in this action‐packed adventure. Firethorn is fast paced with unexpected twists and turns. A joy to read.”
— Margaret Daley, award‐winning author of 75 novels

Meet The Author:
Ronie Kendig grew up an Army brat, married a veteran, and they now have four children and a golden retriever. She has a BS in Psychology, speaks to various groups, volunteers with the American Christian Fiction Writers (ACFW), and mentors new writers. Ronie can be found at www.roniekendig.com.

A: I am a classic “stuffer”; shoving down the bad and not wanting to deal with it. The thing is, this type of survival actually becomes counterproductive because what’s down there, what’s simmering below the surface, are all the things that have been “stuffed.” The Bible promises the truth will be brought into the light, and I believe that applies to our hurts, aches, and pains. It’s better to deal with them head‐on than to let them fester and boil, though at the time, it does not seem so.

Q: All of the books in the Discarded Heroes series take readers to a different part of the globe. Did you visit each location yourself or were you able to conduct research to keep the series accurate?

A: I wish I had visited them all! But today’s technology enables me to “visit” them via friends who have been there, experts who’ve studied/lived in these locations, and then there’s good ol’ Google Maps that allows me to visibly see the terrain via their satellite images. There is so much information at our fingertips these days, but I confess I would absolutely LOVE to have that firsthand, experiential knowledge over the secondhand knowledge.

Q: Firethorn is the conclusion of the Discarded Heroes series. Now that you have to say good‐bye to the members of Nightshade, who would you say was your favorite?

A: Honestly? I don’t have a favorite because they’re ALL favorites—they’re my published “children,” and there is something unique and awesome about each one. Max took me on a wild, turbulent ride, but I love his tenacity and penchant for directness. Colton—well, I don’t think I need to say much more than he’s the consummate cowboy with all the charm, good looks, and common sense known to exist in his breed of man. Quiet Canyon wormed his way into my heart with his loyalty and his dedication to the mission, but I could really relate to the raw brokenness that lurked beneath his “perfect” surface. Griffin was the grizzly who is as much a teddy bear as he is a grizzly. Rock‐solid tenacity rounded out the Kid’s speak first, think later flaw. Dighton and Azzan, who joined the team in the middle, turned out to be incredible men with intriguing stories and character.

Q: This novel also tackles discrimination and prejudice, which are both difficult subjects. What advice would you give a reader who is dealing with one or both of these issues?

A: Growing up in a military community, I was surrounded by diversity. So when a dear friend of mine moved away to Georgia and called me one day with a story of how a convenience store clerk wouldn’t take money from her hand because my friend was African American, I was truly stupefied.
Prejudice and discrimination still exist in our world, and it absolutely breaks my heart. I kept the thread on this light because it’s not the focus, but I did want to pull back the veil, so to speak, on this topic. I had others “warn” me that I would get “attacked” for being a “white girl writing about a black man.” Some even suggested I write about a different character for the last book, but to me, if I had done that, it would be discrimination. Griffin is the backbone of Nightshade. He needed his story told, and I have no regrets.
If I made mistakes in portraying the African American community, I apologize, but I couldn’t not tell his story simply because he was a different color. But just as I have an African American in my stories, I have Caucasians, I have British, Russians, Swiss, Middle Eastern, Jewish, Irish. . .I love culture, and readers will consistently see that diversity in any Ronie Kendig novel they read. It’s what makes our world exciting and beautiful!

Q: Ultimately, what do you hope your readers take away from Nightshade and the Discarded Heroes series?

A: Admittedly, it’s sad to realize this is the final book in the series. Readers have responded very positively, and I think the original mission of the Discarded Heroes—to open dialogue about our troops, about what they do/see/experience and how that affects them, their lives, and their families—has succeeded. It is my hope that readers will be more aware, and ultimately, more supportive of our military heroes, both active duty and veteran.