Okay, I cannot be any more excited! Last summer, I requested my publisher switch to a new designer of my choosing–Kirk DouPonce of DogEared Design. The man is a creative genius and his designs have graced some of my all-time favorite covers.

One of the cool elements of the Raptor 6 cover is the Raptor Team symbol that the cover designer created. I think it’s tough, intense, and tres cool.

You might remember the “Help Me Find Dean Watters” campaign, where we hunted for a real veteran to grace the cover of Raptor 6. We indeed found a Special Forces veteran, nominated by his wife. They are a truly neat couple. When I talked to him, he said the only reason he’d was doing the cover was because, “my wife thinks it’d be cool.” Love a man dedicated to his country, his family, and God! Hooah!!

(Names omitted for privacy and protection–please respect this. If you recognize the veteran, please do not mention his name. All comments will be moderated!)

Without further ado, here is the amazing and intense cover for Raptor 6, Quiet Professionals Book 1. 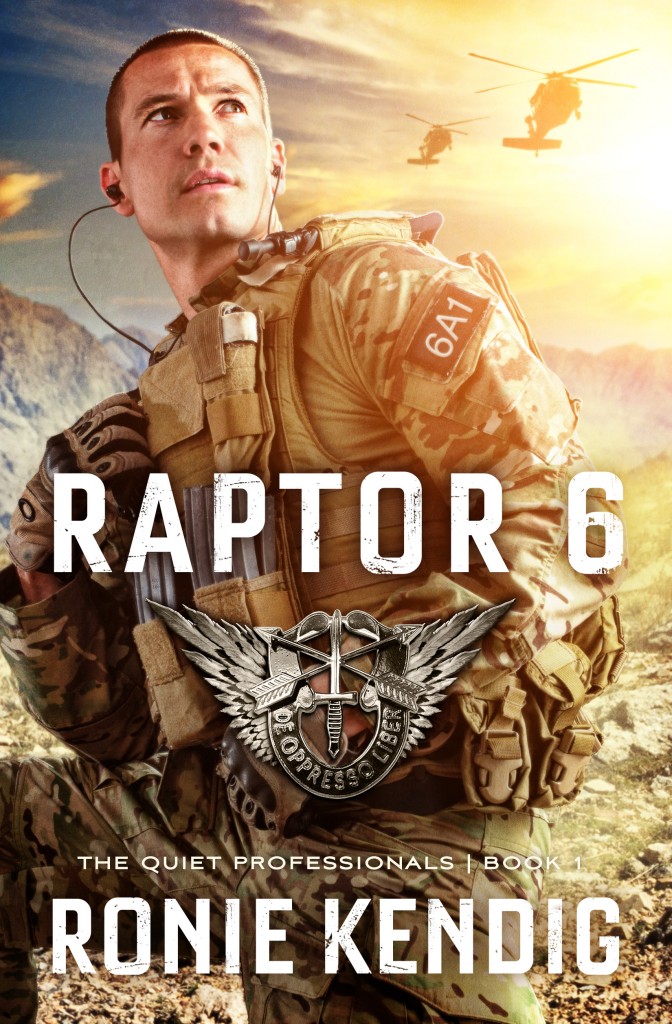 His mission. His team.

Those elements are the laser-like focus of Captain Dean Watters’ life. When a threat is launched against both of them, Dean’s Special Forces training kicks into the highest gear possible. Failing to stop the hackers coming after the military’s super-computer isn’t an option.

Zahrah Zarrick is a missionary teacher to Afghan children in Mazar-e Sharif. And a target. Her expertise in algorithm cryptology makes her an unwitting pawn in the hacker’s deadly game.

When Zahrah is captured, compromising the US military, Dean is forced to crack the box around his heart. A move that might come at the highest cost.

Now…the giveaway. One commenter will win copies of TRINITY and TALON!! You earn extra points by tweeting this amazing cover, sharing it on Pinterest, following me on Facebook, etc.! You *must* comment on the blog to even be eligible!