High-tech gear, shape-shifting aliens, simulated reality, and hoverboards…Colt must step into his true destiny before our world falls in chaos! 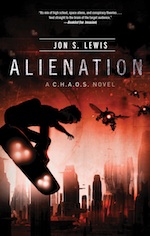 by Jon S. Lewis. This is the second CHAOS novel, and I found it to be a fun read. I am sure my 12.5 year old twin boys will love it. I found it to be adventurous! If you have a pre-teen or teen who loves novels with supernatural elements, action, adventure and heroes–this is the book for them!

But before he can save the world, he has to survive the day.

All Colt wants to do is return to his old life . . . where aliens don’t exist . . . where mankind hasn’t been targeted for destruction . . . and where his parents are still alive. Unfortunately life doesn’t work that way.

The United States government believes Colt holds the key to our survival, so they’re sending him to the CHAOS Military Academy along with his best friends Oz and Danielle. There they’ll be trained to defend Earth against a swarm of alien shapeshifters known as the Thule. But someone is trying to eliminate Colt before he can lead that charge. Shocked to learn about key events in his past and unsure who he can trust, Colt is alienated and on the run.

You can check out more about the CHAOS novels at http://www.chaosnovels.com/

Jon S. Lewis is the coauthor of the Grey Griffins trilogy and the upcoming Grey Griffins Clockwork Chronicles. He also writes for the DC COMICS family of publishers. He resides with his family in Arizona.

Win an iPad from @JonSLewis and @NelsonFiction in the Alienation iPad2 Giveaway!

The invasion was only the beginning! Jon Lewis is celebrating the next adventure in his fast-paced C.H.A.O.S. series with an explosive giveaway!

One thrill-seeker will receive:

Enter today by clicking one of the icons below. But hurry, the giveaway ends at noon on February 7th. Winner will be announced at the Alienation Facebook Party on 2/7. Jon will be hosting an Author Chat, giving away copies of the books and gift certificates to iTunes and Amazon.com! Don’t miss a second of the intrigue!

Grab your copy of Alienation and join Jon on the evening of February 7th for an author chat, spy training (How much do you know about alien invaders?) and lots of giveaways.

Don’t miss a moment of the fun. RSVP today and tell your friends via FACEBOOK or TWITTER and increase your chances of winning. Hope to see you on the 31st!