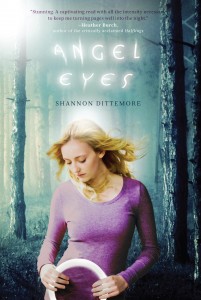 Once you’ve seen, you can’t unsee.

Everything changes when you’ve looked at the world through . . .Angel Eyes

Brielle went to the city to chase her dreams and found tragedy instead. She’s come home to shabby little Stratus, Oregon, to live with her grief and her guilt . . . and the incredible, numbing cold she can’t seem to shake.

Jake’s the new guy at school. The boy next door with burning hands and an unbelievable gift that targets him for corruption.

Something more than fate has brought them together. An evil bigger than both of them lurks in the shadows nearby, hiding in plain sight. Two angels stand guard, unsure what’s going to happen. And a beauty brighter than Jake or Brielle has ever seen is calling them to join the battle in a realm where all human choices start.

With stunning prose, endearing characters and a compelling story, Dittemore spreads her wings and *soars* into the YA market. ANGEL EYES is one of the most enthralling stories I’ve read in a long while. Captivating and yet entertaining, it is so much more than “just another YA novel.” Elements challenge the reader, present new and unique angles on long-held traditions of angels and demons. And the prose—holy cow, the prose is absolutely stunning. Dittemore outdoes herself over and over in the pages of ANGEL EYES! The characters are quirky, tortured, and so raw you can’t help but root for them. Truly, a most excellent read. Brilliant!! Were I to give this a rating, it’d definitely be five gleaming halos—with an orange tutu! I anxiously await the sequel! 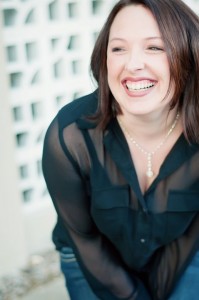 Shannon is a wife and mother. A sister. A daughter. A friend. She was raised in Northern California by her parents-pastors of their local church and constant figures of inspiration.

As a youth, Shannon traveled with an award-winning performing arts team, excelling on stage and in the classroom. As a young adult, she attended Portland Bible College, continued acting, and worked with an outreach team targeting inner-city kids in the Portland-Metropolitan area.

It was in Portland that she met her husband, Matt. They were married in 2002. Soon after, they took the reins of the youth ministry at Living Way Community Church in Roseville, California where they continue to serve in that capacity. In October of 2004, their son Justus was born, followed by their daughter Jazlyn, born in 2008.

Find out more at www.shannondittemore.com.

*I received a copy of ANGEL EYES from the publisher as part of the LitFuse Blog Tour in exchange for my honest review.