a daughter who thought she got a new purse… 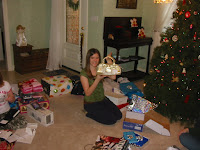 a daughter who found an iPod Touch in said purse… 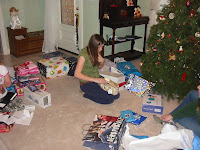 Other daughter after her violin concert 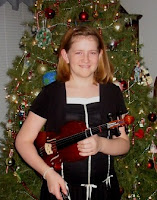 In an earlier post, I mentioned my writing rest. And how I was already ready to be released from that rest. December 23 is when I felt the “hold” hand on my shoulder lift. Not wanting to rush forward in case I was wrong, I allowed myself to do some light editing, but I still did not write. In my mind, I’d hoped for the day after Christmas…and that’s exactly when the well unstopped. 😛

I started a new fantasy…and I just wrote. And wrote. I’m up to 13K since December 27. That’s not a record for my by an means (hey, I wrote almost 30K in one weekend before!), but it was a beautiful sensation. I would write after I got home from work, then go to bed at a decent hour (no all-nighters for me LOL).

the really incredible thing for me is this–it opened my creative juice vein. Last night, I sat thinking about my new military thrillers series. I’ve tried to figure out what’s going to happen in that story all month and got…NUTHIN’!!! But last night–it came flooding out. I am soooo excited. It took a month of not writing or editing or critiquing, then a handful of days where I just wrote (internal editor squashed flat as I wrote and wrote with redundancies and repetitions and misspellings…shhh, don’t tell her. LOL).

So. I’m back. but in this New Year, I want to be focused on four things:

Okay, so that pretty much encompasses my entire life, save my day JOB (but hey, even those hours got cut!!). 😀 But I’m determined to make the last three a priority in my life as the first one GUIDES my life by increasing my daily time with Him.

Last year, i felt strongly it would be a YEAR OF TRANSITION. And let me tell you, if God ever speaks that to you, brace yourself! LOL But for this year, I believe the phrase came to me in october. It’s going to be a YEAR OF PROMISE!