HOOAH! I’m having some serious fun with the AWESOME covers for The Tox Files, and the cover for THE WARRIOR’S SEAL, A Tox Files Novella (October 2016) is proof! A hundred-thousand thank yous once again to Kirk DouPonce of DogEared Designs for his creative genius. THE WARRIOR’s SEAL will provide a brief introduction to Tox Russell and his team in a digital-only format (or in other words–I’ll tease you like crazy with what’s to come in CONSPIRACY OF SILENCE). 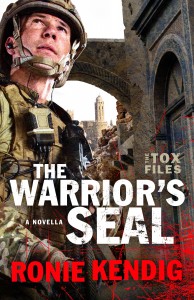 A Special Forces team is thrust into a war with the past after an artifact unleashes a deadly toxin.

Special Forces operator Cole “Tox” Russell and his team are tasked in a search-and-rescue—the U.S. president has been kidnapped during a goodwill tour. The mission nosedives when an ancient artifact unleashes a deadly toxin. Tox must stop the terrorists and the toxin to save the president before it’s too late.

ENTER TO WIN a Quiet Professionals novel – autographed by Ronie!