Yea!! I’m so thrilled to share with everyone the cover for my spy thriller Dead Reckoning to be released March 2010 from Abingdon Press. I’m so pleased with how the design team captured the heart of my story and translated that into the cover, but of course, they couldn’t have done that without the lead of the fabulous Barbara Scott, acquiring editor for Abingdon Press. (THANK YOU, BARBARA!!! YOU’RE AWESOME!!) 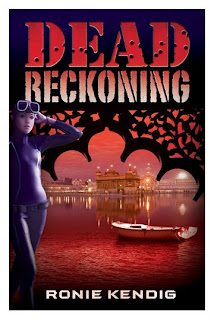 When Shiloh Blake’s first large-scale underwater archeological dig traps her
in the middle of an international nuclear arms clash, she is forced to flee for her life
into the streets of Mumbai, India. Is the man trailing her an enemy,
or is he sent by her CIA father to protect her? Whoever he is, the only way
to end this nightmare and prevent a nuclear meltdown is to
join forces with former US Navy SEAL Reece Jaxon.

Leave a comment and tell me what you think! I’d love to hear your thoughts.