So, a little breather for a post that’ll wax reflective. Growing up one of the strongest motivations for me was praise and/or rewards. Hearing praise from my mother boosted me to keep going, to do it better, stronger, MORE. Ya know? To just keep…going.

That has carried into adulthood as well. While I’m a much more confident, secure person than I ever was before, I still thrive on praise. Don’t we all? Doesn’t it fuel your day when someone says how much you bless them? When you do your job and an unexpected award lands on your desk, whether a trophy or a note card? My heart was warmed this weekend when I received a Thank You note signed by members of a Civil Air Patrol Squadron to whom I’d donated Nightshade patches they could use on their uniforms. 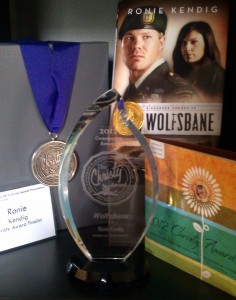 As a writer, we are almost TRAINED to look for those accolades. The first reader review. The first “high-five” from a professional reviewer–RT Reviews, Publisher’s Weekly, etc. Then we are up for industry awards (photo above of Christy Award for Wolfsbane). Reader’s Choice awards.

Sometimes, that praise, those accolades and affirmation, become a crutch. They actually weaken the person because we, as humans, start looking to others for affirmation. But what happens when the praise of man fades? When the applause from readers grows dim? Or when we become so used to the praise/reviews, WE grow deaf…it’s no longer enough?

I feel the Lord has “warned” me that 2013 would be a year EMPTY of those accolades. God’s been trying to train my mind for the last couple o f years to listen to His voice only. At first, it was listening to Him in regards to what to write and what not to. Then listening to Him when bad reviews came in. Now…he’s stripping the other voices and leaving the stage of my life dark and unlit… 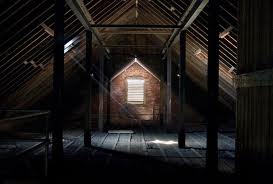 Save One Voice. His.

I’ll confess, I’m already struggling. Feeling a smidge lost. But I hear Him. I sense His unconditional love and acceptance. He has told me to write. He has led me to where I am now. He will not fail me.