I’ve so been looking forward to this installment of the TRIPLE THREAT novels–even though it’s the fourth (I’d only expected three): Eyes of Justice (A Triple Threat Novel)

by Lis Wiehl (with April Henry). 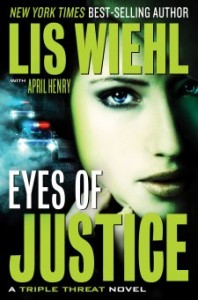 I am a long-time LIS WIEHL fan, and EYES OF JUSTICE is no different. With compelling plots ripped right out of the headlines and characters I’ve grown to love, EYES OF JUSTICE was both compelling and shattering to read. Wiehl/Henry goes where few authors tend to venture–into the realm of killing off a main character. It’s a challenging and risky step, and one some readers don’t take kindly to. However, the death of one of the Triple Threat was handled very well and served as the main thrust for EYES. Admittedly, I was too stunned to even turn the page when one of the three died. But the ladies fight hard, willing to sacrifice everything to find justice for their fallen comrade. The danger just doesn’t stop. The stakes ratchet and tension tightens. A very well-done story. I will say that once or twice I felt the plot elements were *too* well drawn, making them feel a bit contrived or convenient, but this did not detract from the overall story. Lis Wiehl remains on my “must-read” author list!