DARKNESS RISING – a thrilling sequel in the East Salem series. 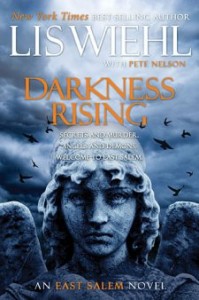 The evil in East Salem is no longer content to hide in the shadows. The stakes—and the darkness—are rising.

Dani Harris thought there wasn’t much left that could surprise her after serving as a forensic psychiatrist in East Salem. And Tommy Gunderson has faced few challenges in his life that he couldn’t overcome by either physical strength or his celebrity status.

But as they race to uncover what’s really happening behind the high walls of St. Adrian’s Academy, it becomes clear that supernatural forces have been at work here for generations. And now their focus is on making sure Dani and Tommy don’t interfere.

When the unseen becomes seen, faith is the only weapon strong enough to fight in a battle involving not just murder and betrayal—but angels and demons.

RONIE’S FAST-ROPE REVIEW: Having read the first book, WAKING HOURS, I have to admit I sort of held my breath as I approached DARKNESS RISING because the first book barely touched the supernatural elements, which was a smidge disappointing. But fears be quieted! This book had an awesome supernatural thread–and I’m still a bit embarrassed at how giddy I got at the appearance of Swiss Army knives. . .with attachments. I’ll never look at a pocketknife the same way (you’ll have to read it to get that).

Also, I thoroughly enjoyed the deeper spiritual elements found in DARKNESS RISING that perfectly complemented the supernatural ones. The absolutely compelling plot drove the story and characters through to a very satisfying ending with a promise of an exciting conclusion to the series with the third installment.

Characters, with such unique professions as pro football and forensic psychiatrists can often come across as cliché or trite, but Wiehl and Nelson do a phenomenal job in keeping these characters unique and entertaining. I loved the intricate histories woven into the story that drive the mysteries and ultimately the darkness that rises is very a la Da Vinci Code but were also incredibly fascinating and had me Googling the various artists and pieces mentioned like the triptych. I adore books that make me learn something! Truly–one of the best yet by Wiehl! I cannot wait for FINAL TIDE.

**I received this book as part of the BookSneeze program with the only agreement hat I would read and offer my honest review, which I have.