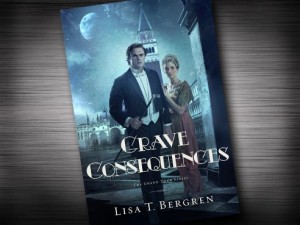 It is my extreme pleasure to participate in the blog tour for Lisa T. Bergren‘s Grave Consequences: A Novel (Grand Tour Series)

For Cora Kensington, the journey of a lifetime takes unexpected twists. And her future—her very life—depends on the decisions she’ll make at each crossroad. As her European tour with her newfound family takes her through Austria, France, and Italy, an unseen enemy trails close behind. Meanwhile, a forbidden love continues to claim her heart, putting everyone’s plans in danger.

And as Cora stays one step ahead of it all, what might need the most protection is her own heart, torn between the dramatic pursuit of a dashing Frenchman and a man who has been quietly staking claim to her affections all along. Love has dangers all its own. She must escape the bonds of the past and discover the faith to make the right choices, as each one has grave consequences.

GRAVE CONSEQUENCES, the second book in the Grand Tour series, is one of Lisa Bergren’s best novels to date. The adventure, danger, and intrigue that faces Cora Diehl Kensington honestly never let up. A time or two, it felt like a bit much, but the mastery with which Bergren wove this tale headed off my negative thoughts with compelling characters. I admit it—I was conflicted over who Cora should be with. Does that make me a bad person? She just did a fantastic job making both potential suitors equally attractive. If Cora had waved more, I would’ve fought Bergren over the ending. Alas, the story was spectacular and the characters to-die for—and they almost do! I strongly recommend GRAVE CONSEQUENCES—in fact, ANY Lisa T. Bergen novel!

Lisa T. Bergren is the award-winning author of over thirty-five books, with more than 2 million copies sold. A former publishing executive, Lisa now divides her time between writing, editing, parenting three children with her husband, Tim, and dreaming of her next trip to Italy. She lives in Colorado Springs, Colorado.

Celebrate the release of Grave Consequences with Lisa T. Bergren by entering to win an iPad Mini!

Enter today by clicking one of the icons below. But hurry, the giveaway ends on March 23rd. Winner will be announced on March 25th at Lisa’s website.

“Bergren, launches readers into a sumptuous world of wealth and world travel with the first in the Grand Tour Series featuring Cora Diehl Kensington… This is a worthy beginning to the series.”
~ Publishers Weekly

“Here’s a new historical series with something for everyone: romance, mystery and family issues. Bergren brings the Grand Tour season of the wealthy of the early 1900s to life, and her characters jump off the pages. This series is sure to land on readers’ keeper shelves.”
~ Romantic Times Book Reviews (A 2012 Reviewer’s Choice Award Nominee for Inspirational Romance)