Last fall, I talked with Sarah Grimm, owner/designer/genius of Grimmlies, about creating a Grimmlies version of Chima, the raqine from Embers. And now…here is she–CHIMA!! 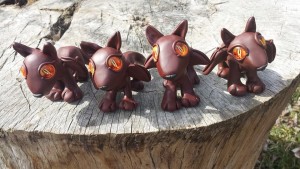 And for your reading pleasure, for those who have yet to read Embers, here is a snippet with Chima:

In the yard below, Klome stumbled backward from the den, using one of the corded whips and aiming it at the opening. Tili’s question froze on his tongue as the wood gate exploded. Shouts and screams. A second later, a raqine soared into the open, roaring.

The sound vibrated against Tili’s chest.

Zicri? But as the beast angled toward the den master, he saw the familiar red tinge to the coat—Chima!

“What is the bother?” It was his father’s voice this time, behind him in the hall.

Chima contracted, poised to attack, then lunged. Tili held his breath, fearing for his friend’s life. The raqine soared to the top of the den. Then onto another, lower building. She ran, jumping rooftop to rooftop.

“No,” Tili muttered, jogging along beside the windows, pacing her. Where was she going? The clearing? “No! No, no, no!” He stopped and pivoted. Checked her neck. Slammed into his father. Rolled around him. “Chima’s going airborne and her collar’s missing!”