Early reviews are coming in, and Raptor 6

is leaving its mark!! 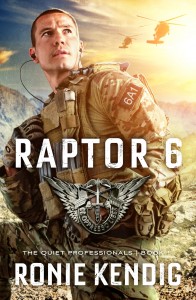 Trust and betrayal are the themes of Christy Award–winning Kendig’s (Wolfsbane) fast-paced military suspense novel, the first in a new series featuring Capt. Dean Watters and his team. Deployed in Afghanistan, Watters and his team are unstoppable. But Zarah Zarrick, daughter of a retired general and now a Christian missionary teacher of young Afghan girls, is also unstoppable. She has the technical skills the Afghan terrorists covet, and to Watters’s dismay, she trusts that God will protect her. Separately and together, they must learn whom they can trust. As the stakes are raised higher and higher, Zarah and Watters stand against the wiles of terrorists and the skewed values of supposed friends to prove themselves to God, each other, and themselves. Agent: Steve Laube, Steve Laube Agency. (May)

Last week, I also discovered a review by RT Book Reviews for Raptor 6. They wrote (with my side note in brackets:

Raptor 6 is a fast-paced, intriguing novel set in modern-day Afghanistan. The characters are believable, but there are a lot of them [yes, there are!] to keep track of. As the story progresses, readers are continually drawn into the suspense of what is going to happen to Zahrah and Dean and who is behind it all. This first installment of the Quiet Professionals series will leave readers anxious for more.”– RT Book Reviews