I had a breakthrough this week. Well, at least I thought I did. LOL Monday we drove up to Plano (about 45 minutes north east of where we live now) to look at a rental home. It’s a pretty home–not GREAT, but would definitely meet our needs…and that’s the thing. We NEED to move. HAVE to move–our lease is up soon and the owner of this home wants to sell. SIGH.

Well, I was none too happy about it because there are so many factors to consider…like our homeschool enrichment classes and me commuting twice a week, the boys’ speech therapy, Brian if he gets into the FBI (which means another move within the next year). Anyway, on the way there, I was telling my hunky hubby about this breakthrough–how I’d gotten to the place with God’s help and grace, that I really truly believed the promise He gave me–that I’d be published. That I could move beyond the despair of rejections (yeah, yeah, I hear you laughing). Really, I do much better with rejections…

Well, doncha know I’ve been tested beyond belief since then. Wicklow Gang got rejected because we are four unpubbed authors. The publisher said we had an incredible story cooncept, the writing was great…sigh. So, there it is. THEN! I find out that publisher I had been waiting on with another story lost my proposal. That’s in addition to the agent that had a similar thing happen last week. 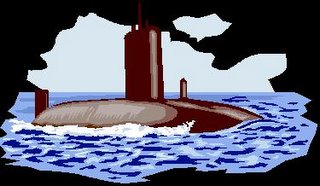 So, you’re sitting there wondering what a Screen door on a submarine has to do with all this, right? Well…that’s about how I’ve been feeling in life, in writing, with my friends, with my familiy. You might call it a pity part, but I won’t. LOL I seriously feel useless. I keep wondering…what’s the point. but I know better than this line of thinking. I really do. Back in the 90’s brilliant singer/songwriter Rich Mullins had a song called Screen Door. I had the distinct privilege (Okay, yes–it was a major blast of a job!!) of coordinating concert tickets for a large bookstore chain back then, so I got to meet and hang out with Rich at one of his in-stores. He was truly a very incredible man–if he could’ve just learned to Buckle up! Anyway, the chorus went something like this:

It’s about as useless as

A screen door on a submarine

One is your left hand

One is your right

To hold on tight