Hey, Peeps! As many of you probably know, my twin boys have been on the great Asperger’s adventure since they were about 5 years old. One twin presents more idiosyncrasies than the other, but together, they make life intriguing!

Although my writing schedule is pretty insane at the moment, when the opportunity came up to check out this app and storybook with my twins, I lunged at the chance. So, here’s a bit about the book, then an official Fast-Rope Review!

DESCRIPTION | The adorkable JMan and his plucky hedgehog sidekick, Mr. Redge are the unstoppable, secret superhero team who save a classmate from the poking pranks of Dr. Evil Touch! Join this quirky duo on their quest to stop a bully, make the school playground a peaceful place, and more importantly, make a new friend who likes crime fighting, capes and karate, too. Discover JMan’s hidden notebook on each page about what it’s like to be an Aspie.

ABOUT THIS APP | This INTERACTIVE storybook app is based on the real JMan, Jonathan Murphy, and his REAL LIFE adventures growing up with ASPERGER’S SYNDROME. Written by his sister, Molly Murphy, and narrated by Jonathan, the story is told by someone who sees his world from a very unique perspective. It promotes SELF-ACCEPTANCE, AWARENESS, and an UNDERSTANDING for others who are different.

– You can change the superhero, JMan, into super-heroine, Jaycee.

– Touch Mr. Redge on every page and a SECRET NOTEBOOK pops up with age-appropriate information on Aspergers Syndrome, being different, and bullying.

– Easy to use navigation, customization, and page turning effects.

– Narration with word highlighting, self-read, or record your own narration options.

FAST-ROPE REVIEW!
Check it out: My awesome son, Ryan, reviews The Mighty League Book App with me. Here is a snapshot of Ryan working the app!

The Mighty League Book app starts with The Terrible Taunting which features JMan (or, if you’d prefer, Jaycee). Rated for ages 5-11, the app was a little too young for my 14 year old Ryan, but not so much that he was bored. He sat at the island, intent on reading the interactive, comic-strip style story about JMan. Ryan enjoyed the hidden notebook that was pretty similar to a journal where JMan shares about his life, his idiosyncrasies that make him uniquely an Aspie kid, and his struggles with social settings. 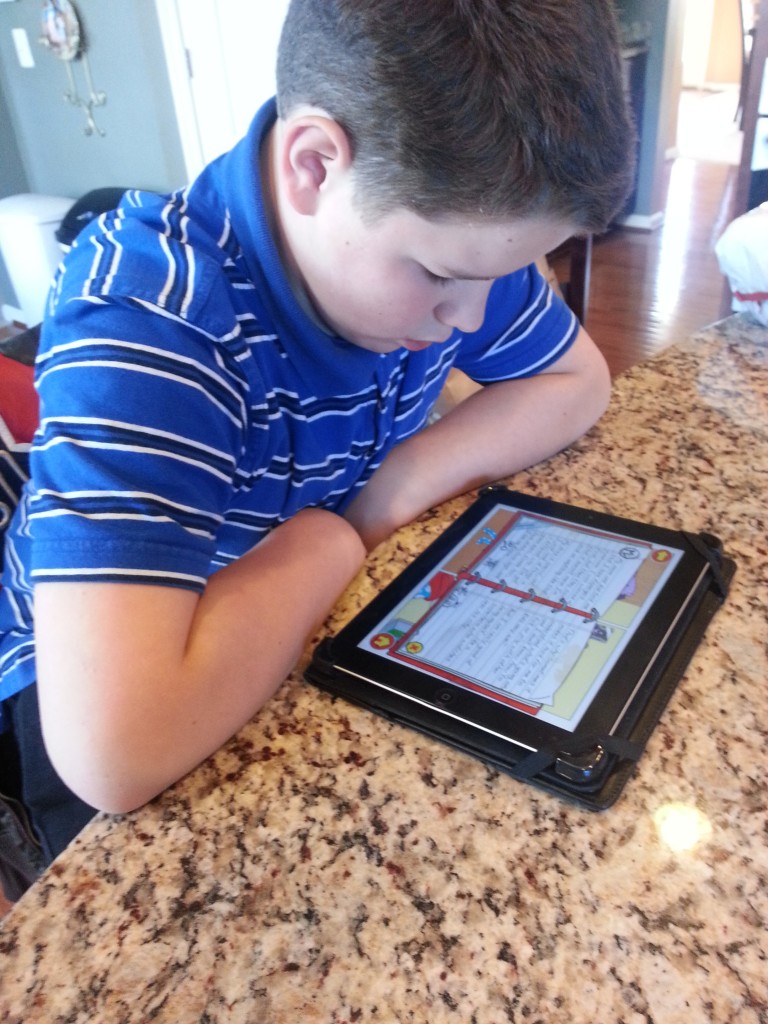 We found the app pretty easy to use, though some of the hidden items weren’t as intuitive as we though they should be. Ryan said he found some elements a little boring, but mostly he enjoyed it.

Ryan and I think this app and the storybooks will be a lot of fun for those incredible kiddos who see the world a little differently, while teaching sound moral principles.

Geek Club Books is celebrating the debut of their Mighty League Book App series with an iPad Mini Giveaway!

One winner will receive:

Enter today by clicking one of the icons below. But hurry, the giveaway ends on November 16th. Winner will be announced November 18th at Geek Club Book’s blog.

Don’t miss a moment of the fun; enter today and be sure to stop by Geek Club Book’s blog on the 18th to see if you won. (Or, better yet, subscribe to their blog and have the winner announcement delivered to your inbox!)