The following is an article by Jessica Dotta, Sr. Editor of Inspire a Fire. I highly recommend you check out this blog–an awesome community of writers committed to making a difference for the kingdom. 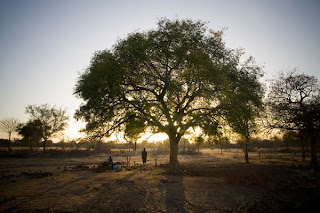 “We have much to be judged on when he comes, slums and battlefields and insane asylums, but these are the symptoms of our illness and the result of our failures in love.” — Madeleine L’Engle 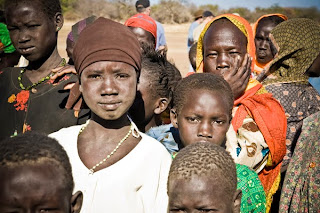 When my brother traveled to the Sudan he had an encounter that changed his life—and as it ends up, mine too.

He stood in Darfur at an orphanage filled with children leftover from the genocide. There were over 800 children, and during the night wild dogs were dragging them off and killing them.

My brother already felt shell-shocked from the travesties he’d witnessed in Uganda.

The day was hot. The sun beat down upon him. His camera had nearly been ruined from all the dust. He’d barely slept. His gear was heavy. Yet his conscience was seared by the numbness he felt, so he turned and confessed to a Sudanese pastor.

“We shall pray right now that your heart will be opened,” he was told.

Not long after that prayer three young children approached Joshua and started to follow him. After a bit, his father nature kicked in and he stopped and sang Father Abraham. It didn’t take long before the four of them were dancing and going through the motions.

When they finished, he asked the children to tell him how they came to be there.

The oldest, a girl, answered. “The soldiers came and shot my mother and father, so I came here.”

The two other children nodded in agreement. “Me, too.”

He was grief struck, but it was what transpired next that tore my heart. “Do you have a Mommy?” The little girl asked my brother.

Again, his answer was yes.

“Oh,” she said, her voice hinting at a strange intermingling of numbness and grief.

Her question stirs me still. For I believe it came from her soul and revealed the thoughts of her heart. She didn’t want to know what his country was like, what kind of food he ate, or what he did for a living. She had her own bullet holes leftover from the genocide. Her world consisted of this single question: Who still had parents and who didn’t?

In her questions I heard her worry and fear. Imagine being trapped in a war-torn country, a land of famine, drought and disease. Imagine trying to survive it as an orphan with death threatening you every hour. No matter how much she’s endured, at the end of the day, she’s still just a little girl. And all she really wants is her Mom and Dad.

I imagined my daughter living as an orphan in the Sudan. If I were shot and dying, it would be my hope that my brothers and sisters would care for her. But what if her aunts and uncles were killed too? What was it then, that her parents hoped?

So who, I wondered, within the church has the responsibility to step in?

I didn’t like the answer that came. Earlier that week I was shocked to learn that globally I was one of the richest people in the world—even though as an American, I’m pretty poor.

Like it or not I was the rich aunt. I had knowledge of the situation. That made me accountable. 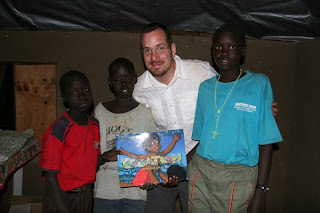 That day Joshua had in his possession a picture book that someone had asked him to give to someone in the Sudan. It was a children’s book with a story about how we have a Heavenly Father who always loves and cares for us. Joshua read the book and gave it to them.

An American woman took it upon herself to raise the money to build shelter. Every person who donated, even a dollar, helped to create a place where the little girl now sleeps safe from wild dogs.

When Joshua told me he’s going to start a branch of Watermelon Ministries called Media Change, a non-profit encouraging Americans to give up a portion of the money spent on entertainment to serve those fighting world hunger and thirst, I wanted to support it.

For seven years he’s helped non-profits raise money that serves the “least of these.” He’s seen the impact a small investment can have. This is a brand new initiative. He’s not quite ready to launch, but you can sign up and be kept updated at www.mediachange.org. His first goal is garner the support of 10,000 people who are willing to give $10 a month. I’m number #3.

What if the task of helping others isn’t as overwhelming as we make it?