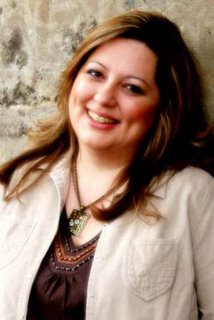 I’m thrilled to host as my very first authoer interview, TRICIA GOYER, for her Arms of Deliverance blogtour. I’ve visited many others who have participated in this blogtour, and while they may hold some claim to fame on knowing Tricia, I don’t. But that’s kewl by me. 😀 I love WWII-era historicals and totally flipped over Tricia’s. Her stories are intriguing and her characters, compelling. On the ACFW e-loop, Tricia sent a teaser for this book, and I positively drooled at her characterization of those characters, how in one paragraph she could make me care about a girl I’d never met!! I e-mailed her and told her I loved, loved, loved her writing. Well, she said just for that, she was sending me the whole chapter. Silly me, I thought she was doing me a favor–all she did really, was incite me to crave this book–so, naturally, I begged to participate in this blogtour. 😀

Enough about me! Now, on to the good stuff…

First, allow me to torment you as she did me. *wink* Here is the summary for Arms of Deliverance: The fourth and final novel in this exhilarating series capturing the tales of men and women swept into World War II. Two friends, Mary and Lee, land similar reporting jobs at the New York Tribune on the eve of the war’s outbreak and soon they become competitors. Mary’s coverage of a bombing raid over Germany leads to a plane wreck and an adventurous escape attempt from across enemy lines. And when Lee hears of Mary’s plight, she bravely heads to war-torn Europe in an effort to help rescue her friend. Will there be enough time for diplomacy or will war get the best of everyone?

Okay, so I’m already drooling. Reporters who are friends vying for the same stories in a war-torn world? How much more exciting can this get?? Well, a lot. Check it out: …well, no. I have a better idea. I’ll torment you with Tricia’s thoughts about this book. Tomorrow, I’ll post the excerpts from the chapter (wicked, aren’t I?). 😀

ARMS OF DELIVERANCE: The Story Behind the Novel

The idea for Arms of Deliverance came one day as I was researching for my novel Night Song. I was watching a video that talked about Lebensborn homes in Nazi Europe. These were homes where young women birthed children for the Reich. After all, to have a “Thousand Year Reich” the Germans needed future Aryans. That was the first layer of the story.

The second layer came when I was researching my novel, Dawn of a Thousand Nights. First, I was studying these amazing women who risked their lives during WWII. (Dawn of a Thousand Nights involved female pilots who ferried US planes around the country.) Other brave women who risked their lives were female war reporters, and I knew I wanted to write a story about them. This sparked my interest too.

Throw in my intrigue of B-17 bomber crews over Europe, and you have the first three elements of Arms of Deliverance. The fourth is a Nazi officer in search for . . . well, you’ll have to read the novel to find out!

The first thing I did when I started researching was to check to see if I could find any veterans who were there. I got a hold of an amazing group of men with the 91st Bomb Group. I couldn’t have asked for a better group of guys. You can check them out at their website (http://www.91stbombgroup.com/). Be sure to take time to look at the photos and read the TRUE stories from the 91st!

The men gave me all types of information. They gave me the details of exact flights, actual photographs from that time, and they shared their personal experiences and stories.

Of course, God always surprises me with “abundantly more than I ask for or imagine” when it comes to research for these stories. Here’s one of those God-gifts:

One thing you may remember from photos of old bombers is the nose art, which highlighted the bomber’s name. During my writing, I kept praying for the perfect name for my bomber—something to tie into the book.

During my research I met a veteran from the 91st Bomb Group named Jack Gaffney. Out of the blue, Jack suggested I use the name “Destiny’s Child.” (This came years before the music group!) You see, Jack was a ground crew member and a nose-art artist. He painted the nose art “Destiny’s Child” and other B-17 Bombers.

At the time, Jack had no idea of premise of my novel included the Lebensborn homes and a special child. Is that cool or what?!

I’d previously read books about the underground resistance in Belgium, and I knew I wanted to include that in this novel too. In order for that to work, I need to set my novel in a Lebensborn home in Belgium. There was only one of these birthing homes in all of Belgium, yet I could find very little information about it from books or the Internet.

One day I was praying about how to get information, and God reminded me I knew someone from Belgium. I’d met a historian Roger Marquet at a World War II reunion. I emailed Roger and asked if he knew how I could find information on this home. “Oh, yes, I grew up in that town, and I knew the woman who manages the castle where the home used to be.”

Imagine that. I knew only one person in Belgium—someone I had met two years early—who had the exact information I needed. Is that another God thing, or what?!

I have to say that I am changed in some way by every novel I write, and this one moved me deeply. You see, as I wrote about the rescue of a special child, I had no idea what God had in store for me and my family.

One month after the novel was written, my husband and I sat down to discuss something that had been on my heart for a while—the adoption of another child. I won’t give the story behind the novel away, but as I reread it I could see clearly through my written words what God had already been placing on my heart.

I will keep news of our adoption of a baby girl from China updated on my blog (http://www.genxparents.blogspot.com/)!

What’s Next From Tricia Goyer:

Currently, I’m working on my fifth novel, A Valley of Betrayal. It is the first novel in a three-book-series on The Spanish Civil War, which took place in Spain, pre-World War II.

Of course, there is more to my life than fiction. I’m also a wife, mom, mentor, and a children’s church leader, and I also write about these aspects of my life. Generation NeXt Parenting will hit store shelves September 2006.

If you’re a parent, like me, check it out!

————————
Howdy-ho! It’s me, Ronie, again…remember to check in tomorrow for fabulous excerpts from this book. I’m telling you–you won’t want to miss it!! Oh, and remember to leave a comment today or tomorrow to enter to win a FREE, FREE, FREE copy of Arms of Deliverance (winner will be chosen Sunday, July 30th).