This morning I received an email from the marketing and publicity director at Barbour, informing me that Wolfsbane, Discarded Heroes #3,

was named to The Christian Manifesto’s 2011 Lime Awards–their top ten fiction picks of the year. I am so tickled!! Thank you, Melissa Willis & TCM! 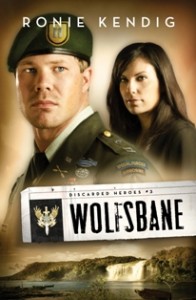 1. DAY OF WAR by Cliff Graham

If ‘Day Of War’ is any indication of what is to come, ‘The Lion of War’ series is going to be absolutely epic! – TCM Fiction Editor Melissa Willis

2. FAIRER THAN MORNING by Rosslyn Elliott

Fairer than Morning is easily the best historical fiction novel I have read this year. I look forward to reading more books in this series and from Rosslyn Elliot in the future. – Staff Writer Sara Shoop

If there’s such a thing as edgy Amish fiction, Kelly Long is undoubtedly the queen of it. – Staff Writer Rachel Ropper

If you follow her series, you are probably wondering just what would necessitate having a fourth book when the third was wrapped up so nicely? Turns out, quite a bit. – Staff Writer Mary Twomey

5. THE QUEEN by Steven James

Snitch is an absorbing novel that explores faith, justice, and community while telling an intense tale that is pulled directly from urban life. – Staff Writer Sara Shoop

9. THE PROMISE OF AN ANGEL by Ruth Reid

If “The Promise of an Angel” is anything to judge by, it looks like Ruth Reid is going to become a favourite amongst Amish fans. – Staff Writer Rachel Ropper

10. THE OPPOSITE OF ART by Athol Dickson

“The Opposite of Art” is a brilliant combination of suspense, spiritual insight, and pure entertainment. – TCM Editor Melissa Willis