When I signed the contract for this series in late 2011, I never imagined time would fly so fast. I’ve just completed the line edits on BEOWULF: EXPLOSIVES DETECTION DOG (coming early 2014), and now…I am tickled to share the cover for this beastly book! 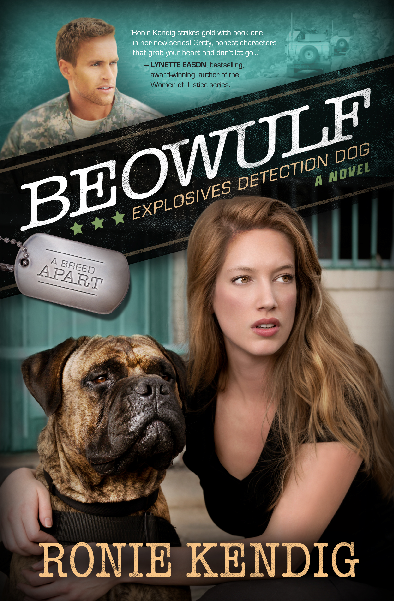 Former Navy handler Timbrel Hogan has more attitude than her Explosives Detection Dog, Beowulf, but she’s a tough woman who gets the job done. Green Beret Tony “Candyman” VanAllen likes a challenge and convincing the hard-hitting handler they belong together might just get him killed.

When tragedy strikes and Tony’s career is jeopardized, Timbrel must re-evaluate her priorities—and fast! A terrorist plots to unleash a weapon of mass destruction on American soil. Can Timbrel and Beowulf track the chemicals in time? Will Tony surrender everything to save the woman nobody believes in?

And just for you readers, I have a small snippet from Chapter 1, even though you have to wait about a year for the rest (this is called torture, in case you were wondering):

“Says here, bullmastiffs were originally bred in England. Supposed to be 40 percent bulldog, 60 percent English mastiff.” Candyman stroked his beard as he stared at the monitor in the communications tent.

“C’mon, Tony,” Dean said. “Even you have to admit that—she called the cops on you, man. Or did you forget?”

I had so much fun writing this story–the characters have spunk and attitude. Tony isn’t fazed by Timbrel’s attitude, but he’d like to throw her dog to the wolves. (Beowulf says the feeling’s mutual. :-D) Despite the romance between these two, this book hit a lot of raw nerves and explored painful truths of military life, I think. It’s my prayer, as with all my books, that it opens dialogue and heightens respect for our military heroes!