It’s been a crazy week. As y’all know, DEAD RECKONING was free on Kindle from the 22nd-29th, and with it came several 2-star reviews that broke the TWENTY-EIGHT 4- and 5-star review streak. These reviews were very harsh, angry that it was a Christian book and free, called the story a mess, said they don’t have “interstates” in India (um, explain that to India’s national transportation system with more than 900K miles of paved highways that stretch ACROSS India’s states (INTER-STATE highways), with 8 lanes in some areas).

Anyway…it was tough to see those when I was sitting here in my cave trying to peck out the last 1/4 of WOLFSBANE, Discarded Heroes #3. But I kept giving the whole writing thing to God, praying and spending quiet time with Him, reminding myself that I write for Him and when I use the gift He gave me, that’s all the approval I need. 😀 God loved on me a lot this past week. It was so beautiful!

But this morning–a wonderful email arrived in my inbox. 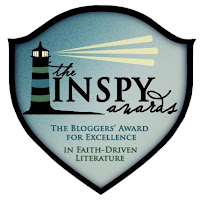 DEAD RECKONING made the short list for the 2010 INSPY Awards in the Thriller/Suspense category!! In case you haven’t heard, this is a contest run by bloggers. Their motto is: “The Bloggers’ Award for Excellence in Faith-Driven Literature.”

Here is the full list–amazing authors and reads!!

CONGRATULATIONS TO ALL THE FINALISTS!!!!

The INSPY Advisory Board is pleased to announce the shortlists for the 2010 INSPY Awards. We thank you for your enthusiastic nominations of books and acknowledge the difficulties in narrowing the field with so many quality nominations.

Life in Defiance by Mary DeMuth, Zondervan, 1st May, 2010

Halfway to Each Other by Susan Pohlman, Guideposts, 1st September, 2009

The Last Christian by David Gregory, Waterbrook Press, 4th May, 2010

A Little Help From My Friends by Anne Dayton & May Vanderbilt, FaithWords, 15th October, 2009

This Gorgeous Game by Donna Freitas, Farrar, Straus and Giroux, 25th May, 2010

Note: Dates from the publishers’ sites were used to determine eligibility

EDITED [by INSPY] TO ADD:
Correction: We just became aware that one of the books initially listed on the INSPYs shortlists was ineligible because of the date it was published. We’ve updated the list above. The INSPY Advisory Board sincerely apologizes for this mistake.