Hey, everyone! Hope you’re having a great week! Our kids start school next week, and I’m looking forward to everyone being in a solid routine again.

It is with trembling and shaking that I review this next book. My big 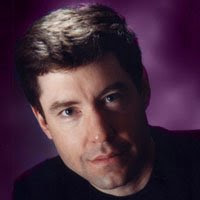 brother and friend, John Olson, has Shade releasing next month! John’s latest masterpiece is a work that is creepily chillifying! Doctors say Hailey Maniates has paranoid schizophrenia. Melchi, the hero, warns her that what she’s seeing is supernatural! I’m telling y’all–this is a story where you have to trust. You know the kind like Sixth Sense and The Others, where you have to just enjoy the ride…then again, is it safe enough to trust? Who knows what portals that trust might open. 😀

Here’s the official blurb about Shade (coming Sept 08 from B&H):

nightmare. The doctors diagnose her as having paranoid schizophrenia and urge her to forget about the hallucinations, but she can’t rest. Too many unsolved mysteries surround the attacks. First and most perplexing is the giant homeless man who rescued her. He seemed convinced that some kind of Gypsy vampire is pursuing both of them. Is he suffering from the same condition she has?
Against all reason, Hailey finds herself becoming more and more attracted to this strange young man. But can she trust her feelings? What if they’re part of her delusion? What if the vampire is real after all? What if the homeless man is the vampire?

Look what John had to say about his first writer’s conference and this book:

I was a brand new writer back in the spring of 1998 when I showed up at the Mount Hermon Christian Writers Conference, clutching the early draft of Shade in my sweaty little hands. Would the editors like it? Would they hate it? Did I have what it took to be a writer? That very first night I sat down with one of the editors to whom I had submitted my manuscript for review, and he asked the dreaded question: “Did you send me a manuscript?” I nodded my head, and he studied my nametag with a frown. Apparently he didn’t remember my name. That was a good sign, right?
“Wait a second… You’re that John Olson? I wouldn’t touch that book with a sixty foot pole… It was terrifying!”
That was my first introduction to Steve Laube, the man who would go on to become my editor, agent, advisor and friend.

Check out this trailer from B&H on the book:

Publisher’s Weekly has done a review. Check it out!