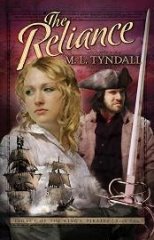 The dark hull of a ship loomed ahead, lit by two laterns, one on the bowspprit and the other swinging on the hook on the mizzenmast. Dim light shone through a porthole below the quarterdeck. Three masts covered with tangled rigging towered against the moonlit sky like webbed claws ready to snatch Charlisse from the boat. Most likely an ex-merchant vessl, the tree-masted, square-rigged ship couuld hold up to forty guns. Charlisse wouldn’t have known or cared about such things three years ago if she hadn’t married a privateer and chosen a life at sea.