I am giddy (hey, I’m a girl, it’s allowed) to promote John Olson’s latest release POWERS!! I have to tell you, I think this is his best book yet. It has a break-neck pace and leaves you absolutely breathless. It’s been a while since a book had me reading this fast and this immersed.

PLEASE LEAVE A COMMENT TO WIN A COPY OF POWERS!!!**

Here is the official information on POWERS:

“Bury me standing. I must be buried standing.”

Powers, the follow-up to John Olson’s Shade (“a must-read for those who enjoy Ted Dekker and Frank Peretti” —Publishers Weekly), introduces a sheltered Gypsy girl named Mariutza. Her grandfather utters a mysterious last request before dying in her arms after being shot by ten cloaked men.

Those same men die before her eyes, but strange powers continue to pursue Mari through the swamps of southern Louisiana where she has always hidden from “the Badness.”

The whole world seems to join in the chase—helicopters, soldiers, government agents, and the police are all trying to kill her. Mari’s only hope of survival is to find Jaazaniah the Prophet, the mythical hero of her grandfather’s bedtime stories.

But she has never been outside the swamp or known other humans besides her grandfather and one teacher. How can this lone girl survive the bewildering world of men long enough to find a prophet who might not even exist? 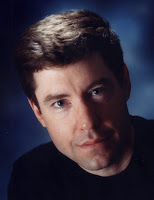 Let me tell ya a bit about John–he’s one of the strongest, most brilliant writers I know. And he’s also one of the most humble. He gives of himself tirelessly–proof of that lies in the recognition he received at the American Christian Fiction Writers National Conference in Denver this past September. John was honored among the nearly two-thousand members for the Member Service Award.

John is also the chair of the FictionFinder.com committee–have you checked that out lately? It’s *the* place to find Christian Fiction.

Oh, and to satisfy the new rules–yes, I received an ARC of John’s book, but no, that did not influence me other than to make me very happy I got to read the book.

PLEASE LEAVE A COMMENT TO WIN A COPY OF POWERS!!!**